Yesterday, I bought myself the ePub eBook of the 4th edition of Bjarne Stroustrup’s The C++ Programming Language. For those who do not know, Bjarne is the originator, the one who gave birth to the C++ programming language ±30 years ago. The 4th edition of the book covers the newest standard of the language, commonly referred to as C++11.

I originally had the third edition of the book, which was published way back in 1997. For some reason, I cannot find that edition in my study anywhere. The third edition of Stroustrup’s book eventually also became the foundation of the original C++ standard in 1998 and became known as C++98.

Anyway, I am really happy to have the new edition, since there have been many new and useful updates to C++11. Bjarne writes concerning the new C++11 language features,

“The result has been a language with greatly improved abstraction mechanisms. The range of abstractions that C++ can express elegantly, flexibly, and at zero costs compared to hand-crafted specialized code has greatly increased. When we say “abstraction” people often just think “classes” or “objects.” C++11 goes far beyond that: The range of user-defined types that can be cleanly and safely expressed has grown with the addition of features such as initializer-lists, uniform initialization, template aliases, rvalue references, defaulted and deleted functions, and variadic templates. Their implementation eased with features, such as auto, inherited constructors, and decltype. These enhancements are sufficient to make C++11 feel like a new language.

Here are a couple of C/C++ funnies:

Here is a fun piece of code to ponder (What is the answer here?):

And, lastly, something that many new programmers struggle with, 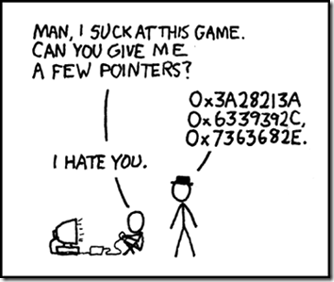