Neither of these two incidents were spotted by the refs and these players were cited after the matches for dangerous play. Last week, Bakkies Botha was cited for a head butt of all things, and has been banned for 9 weeks, which effectively makes him ineligible for the rest of the Tri-Nations rugby series. Yesterday, Jean de Villiers was cited for a spear tackle and received a 2 week ban.

Unfortunately I haven’t been able to find a video of de Villiers’ spear tackle, but I was wondering why the ref didn’t blow him up for that tackle. I saw it happening, and wondered.

Here is my recommendation for infringements worthy of a red on the field. If the infringement was seen by the ref and a red card was issued, the team that the infringing player comes from would have played with 14 players for the rest of the match. Hence, in the case of Bakkies Botha’s infringement, it was committed in the opening minute of the game, and if red-carded, the Springboks would have played for 79 minutes with only 14 players. So, as a result, the Springboks played with the benefit of a player that should not have been on the field!

The solution to this would be that the team whose player infringed and was cited successfully and received a ban: 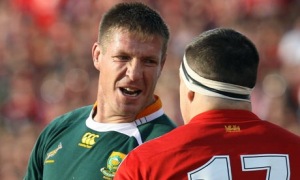 Of course, more rules can be added for red cards and citings that lead to bans, such as players that receive a red card and/or is banned 3 or more times in a period of 365 days, is automatically banned from playing any rugby for the next 365 days.

It is clear that players are not disciplined enough to check themselves during games, and if such stringent measures are taken against infringers, it may just cause these players to think twice (or even three times) before doing irresponsible and stupid things on the field. Another effect it may have is that coaches will also start taking responsibility for the type of players they choose for the teams. Then, perhaps, these types of players (the habitual offenders like Bakkies Botha) will be excluded from the team even before they can cause more damage on the field. Botha "had just returned to rugby after serving a four-match suspension for a reckless charge which kept him out of this year’s Super 14 play-offs," says the Mail&Guardian.

So, what do you think?